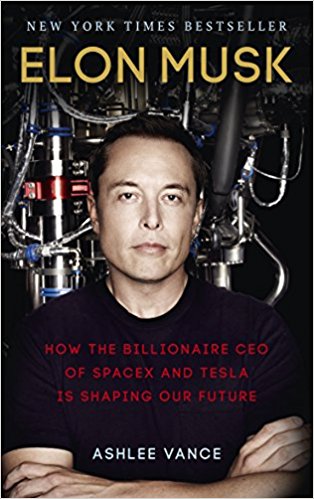 4 Takeaways from “Elon Musk: How the Billionaire CEO of SpaceX and Tesla is Shaping our Future”

Book 2 off the 2018 list and this one took me behind the scenes and into the mind of Elon Musk, one of the most innovative entrepreneurs of recent times.

Documenting his life through a series of businesses (Zip2, X.com, Tesla, SpaceX, SolarCity) and product launches, Ashlee Vance pieces together facts, timelines and perspectives from his loved ones, employees (ex- and current) and business partners. Additional insight is provided via interviews with Musk himself.

Posting about this is rather topical as earlier this week SpaceX launched a Tesla Roadster into space aboard SpaceX’s first Falcon Heavy rocket; a move that not only marries two of his greatest achievements but does so in a style that is very Elon Musk.

Having finished the book, here are 4 things that I took away:

1. Finding the opportunity in stagnating industries

Banking, cars, space travel… these are all industries that had plateaued in innovation and become highly inefficient due to dated tech, politics, complacency, etc.

Throughout the book I really admired Musk’s ability to look at these industries, learn as much as possible about them today and then find an opportunity to do things more quickly and cheaply, ultimately turning them on their head.

2. Always in pursuit of the long-term goal (or purpose), without compromise

With such big goals (e.g. creating a colony on Mars) it became apparent to me that Musk works ruthlessly to step closer and closer, thinking in years and decades, whilst creating short term momentum and never compromising.

Whilst the rest of the world was making hybrid cars, Musk was working through the challenges that come with committing to a more ambitious and long-term goal (a purely electric car).

This was also clear in an email written by Musk explaining why SpaceX wouldn’t be going public soon, demonstrating his desire to protect the long-term and not get into a situation where he has to compromise to appease investors (who potentially think in short-term gains).

3. His approach to deadlines and ownership with his employees

Musk clearly knows how to hire talent. Across all of his companies he’s been able to find people that align themselves to his mission and then work tirelessly to help achieve this.

One passage that stuck out to me was around how he defines deadlines with his employees:

Where a typical manager may set the deadline for the employee, Musk guides his engineers into taking ownership of their delivery dates. “He doesn’t say, ‘You have to do this by Friday at 2pm … He says, ‘I need the impossible done by Friday at 2pm. Can you do it?’ Then, when you say yes, you are not working hard because he told you to. You’re working hard for yourself. It’s a distinction you can feel.

Very nuanced but when combined with self motivated, bright individuals you can see how this is a far more effective way of creating a culture of ownership and accountability within an organisation.

4. Acronyms and inefficiencies in communication

Whilst this made me laugh, it is an example of how important it is to preserve clear and effective communication when starting to scale.

Sent in May 2010 via an email to SpaceX employees from Musk himself with the subject line “Acronyms Seriously Suck”:

“Excessive use of made up acronyms is a significant impediment to communication and keeping communication good as we grew is incredibly important … No one can actually remember all these acronyms and people don’t want to seem dumb in a meeting, so they just sit there in ignorance”

Well said… and another example of Musk removing any possible threat to his businesses achieving their big, big, big goals.

This book was an excellent dive into Musk’s life and exploration of how he has been able to create multiple businesses that are disrupting long standing products and industries.

On one side, he reads like a harsh leader that demands a lot from his employees and would fire someone who has worked for him for years and years without a second thought. On the other, his continuous drive to achieve the impossible and dedication to creating a better future has commanded respect from many all over the world.

I’m excited to see what he does next.